To express the spiritual thing in art, you need to apply to reality as less as possible, because it is the opposite of spiritual. Therefore, the use of basic forms is logical and the only right method. 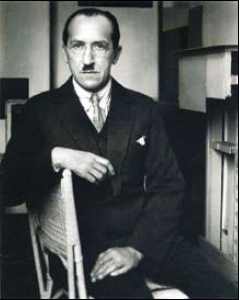 Piet Mondrian (niderl. Pieter Cornelis (Piet) Mondriaan, 1872-1944) – an outstanding Dutch artist of the XX century, one of the founders and theoreticians of abstract art, the author of neoplasticism.

"We can get rid of the oppression of the tragic circumstances of our lives through clear vision of the true reality that exists, but veiled and hidden," wrote Piet Mondrian in 1914, creating the first completely non-objective canvases. The idea of presence in the real world, invisible but incredibly strong spiritual energies, to convey which is possible only with simple geometric shapes, that accompanied him throughout his creative life. High art, as the painterconsidered, should be the voice of pure spirituality, very clean and clearly reflecting the objective laws of the universe.

Creative research of his own artistic handwriting took by Mondrian for over twenty years. Art historians note that out of the three founders of abstractionism (V. Kandinsky, P. Mondrian, K. Malevich) Mondrian was the most consistent and purposeful. The first lessons of painting and drawing Mondrian received from his father and uncle. Home and school art education enabled him to enroll at the Amsterdam Academy of fine arts. During his studies (1892-1897) and after Mondrian creates a number of paintings in a realistic style. These were landscapes and still lifes, with such motives as houses, lighthouses, windmills, dunes and trees, plains and clouds. Mondrian again and again returns to him, like Claude Monet, repeatedly wrote his "haystacks" and "Rouen Cathedral" in different lighting. However, Mondrian in the same motive of trying to find something unchangeable, namely, the line of the true primary form. "Intuitively, – will write later Mondrian, I realized that the painting must find a new approach in displaying the excellence of nature, I felt that true reality can be expressed only through pure plastics". From the traditions of realistic landscape ("Rural house with a linen rope", CA. 1897; "the Baltic mill in the evening", 1907; "the Mill", 1911), briefly passing through an impressionist phase ("the Landscape with pink cloud", CA. 1908; "the Forest", CA. 1910; "the Farm at Duivendrecht", 1916), Mondrian turned to the expressive means of art Nouveau and symbolism ("Piety", 1908). Familiarity with the paintings of Georges Braque, Paul Cezanne and Pablo Picasso defined the experiences of the artist in cubism ("Landscape with trees", 1912; "Composition with trees II", 1912-1913).

Soon in his paintings, Mondrian refuses the slightest hint of the plot, recognition, psychology, allegory, atmosphere, modelling and spatial depth. The artist deliberately reduces artistic means of expression and builds the composition of his paintings on the basis of freely constructed spatial grid ("Composition with large red plane, yellow, black, gray and blue", 1921). The outcome of artistic experiments, this time was the formation of the ideas and laws of aesthetic and scenic system theory, called Mondrian "neoplasticism".

The basis of the new artistic movement is the theory of "pure art plastique", developed and published by Mondrian in his treatise "Neoplasticism". Descriptive means were declared to the plane of the primary colors (red, blue, yellow) in their interaction with surfaces "non-colors" (white, black, grey). The main elements in any composition of a picture became perpendicular lines and planes of color. Through such simple geometric shapes the artist has sought to reproduce a true image of the world, independent of contingencies and subjective perception, to define the boundaries and shape the artistic image, to display the fundamental laws that govern the Universe, to Express the idea of the universal harmony. "Neoplasticism – wrote Mondrian, says the justice, because the equality of the plastic means in the composition demonstrates that everyone can be equal among equals." ("Composition with blue and yellow", 1929; "Composition in grey and pink", 1930; "Composition with gray and light brown", 1936; "Composition in blue, grey and pink", 1938).

Creative heritage(pictorial and theoretical) of Piet Mondrian was largely determined by artistic and aesthetic principles of the XX century, influenced the development of modern architecture, design, fashion. But most importantly, it has developed a new, comprehensive understanding of the meaning of creative activity: "Pure plastic vision of the real world should form a new type of society – just as it now forms a new art. It will be a society based on equilibrium of material and spiritual, and peaceful harmonious relationship will dominate in it."